Sports are a part of everyday life in the United States. Unfortunately, along with sports come sports injuries, specifically concussions. It’s important for both athletes and parents of athletes to be aware that gender plays a significant role in the likelihood of experiencing post-concussive syndrome and other sports-related head injuries. By knowing and understanding how gender affects the probability of these injuries occurring, both you and the athletes you parent will be better able to prevent them from happening. 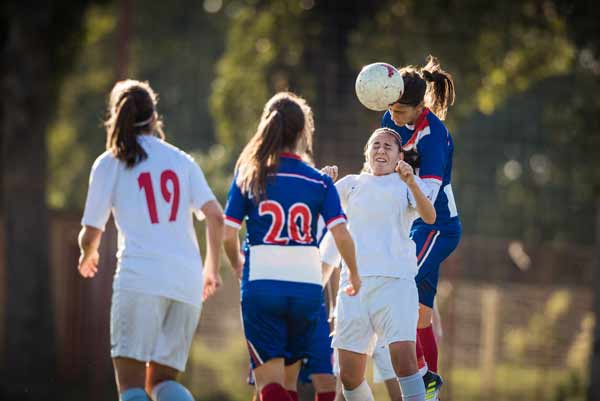 At Vision Specialists of Michigan, our experts are very familiar with diagnosing and treating the conditions that can arise from a concussion. Here we will explore the correlation between sports concussions and gender, as well as discuss how these types of injuries can be prevented.

The Link Between Gender & Sports Concussions

If you’re a sports fan and frequently watch sports coverage on TV or read about it online, you may think that sports concussions are more often sustained by male athletes. After all, men do get the majority of coverage in such cases. However, a study in Psychology Today shows that this isn’t the case, and that it is in fact female athletes that are at a higher risk of sustaining sports concussions than men.

Due to the fact that male-dominated sports – think basketball and football – receive more attention than women’s sports, the coverage of sports-related injuries in the media is somewhat slanted. When football is taken out of the picture (which is understandably the sport where a majority of concussions occur), it is shown that women’s sports may be the more dangerous, particularly soccer. Female soccer players, in fact, report almost twice as many concussions as their male counterparts, according to the above-mentioned study. And for younger players, girls’ soccer has the second-highest incidence of concussions among all youth sports. Further, for every 1,000 games and practices, female soccer players sustain an average of 2.2 concussions, while the men had an average of 1.4, according to the NCAA. In addition, female basketball players had an average of 1.2 concussions, as compared to male players with an average of 0.6.

What Causes the Higher Rate of Concussions Among Female Athletes?

While these statistics about concussions are intriguing, they don’t do much to explain the higher rate of occurrence among female athletes. One theory posits that the disparity is due to the fact that the female neck is typically thinner and weaker than a male’s, which makes it more susceptible to injury from impact. Another factor that could contribute to the higher rate of concussions among women is the fact that the female head tends to be smaller than that of a male.

Female hormones are thought to play a role as well, leading women to experience symptoms like dizziness and nausea – common after a concussion – more acutely than men. Because of this, women tend to report and seek treatment for concussion symptoms more often than men, which in turn has an impact on the statistics.

It goes without saying that the best way to prevent sports-related head injuries is by wearing the appropriate protective gear for the sport. In addition, when a head injury is sustained, no matter how minor, it’s crucial for the athlete to take the time to rest and recover for a spell before returning to impact sports. If the injury isn’t given enough time to heal, the damage from a repeat head injury could be even more severe.

It’s also very important to know about and be able to recognize concussive symptoms. While some collisions that cause head trauma may seem minor and not worth worrying about, there could be serious underlying damage that’s not readily apparent. If you or your young athlete feel disoriented, confused or experience blurred vision, migraines or nausea at any point after a sports-related head injury, seek the help of a medical professional without delay.

Get Treated at Vision Specialists of Michigan

The professionals at Vision Specialists of Michigan have years of experience in treating the symptoms of post-concussive syndrome. To find out more about the signs and symptoms of this condition or schedule an appointment, give our office a call today at (248) 258-9000. You can also fill out our online BVD questionnaire.