Now that fall has arrived and students have a couple months of school under their belts, the time is approaching for parent-teacher conferences. While it’s always troubling when your child’s teacher raises concerns about their classroom performance, especially if it’s a sudden development, don’t automatically assume that it’s due to an attention disorder. Many people don’t realize that several of the symptoms of Attention Deficit Disorder/Attention Deficit Hyperactivity Disorder (ADD/ADHD) coincide with symptoms of vision problems. 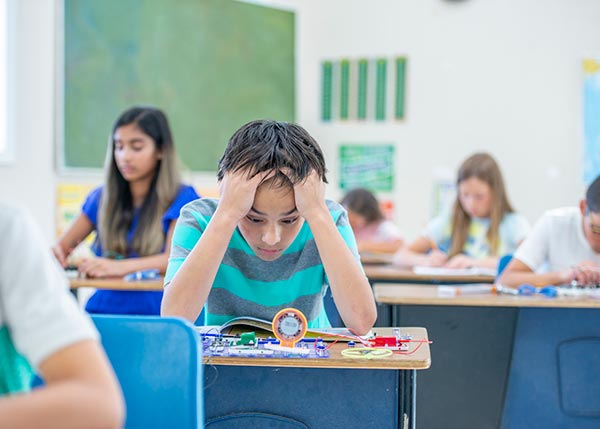 If your child seems bright but their classwork doesn’t demonstrate this, or seems to be a better auditory learner than a visual one, stop and take a closer look. If they exhibit the three following symptoms, the significant reading and learning challenges they’re struggling with could be a result of an undiagnosed binocular vision dysfunction (BVD).

1. Doesn’t pay attention in class. While it’s normal for a child’s mind to wander occasionally, the problem goes deeper with children who have BVD, which is a condition where a misalignment of the eyes makes it hard for the eyes to work together properly. This makes it challenging for them to quickly switch their focus from the board to their paper, and they often have difficulty taking notes.

This is understandably frustrating for these students, and as a result they often fall behind, or even give up completely and start talking and playing around instead. Subsequently, what is really a vision issue appears to the teacher to be an attention problem.

2. Can’t stay on task. Due to eye teaming problems caused by BVD, up-close tasks like reading and writing become very laborious for children with this condition. Visual symptoms of BVD such as blurred or double vision can make trying to bring a single, clear line of text into focus a slow and painful process. Sometimes the words even appear to swim on the page. All of these symptoms cause varying degrees of visual discomfort as well. While some children try to work through the discomfort and continue reading and writing, albeit slowly, others simply give up in defeat.

To a teacher who isn’t always able to give one-on-one attention, it’s easy for these problems to escape their notice. To them it seems like the child constantly needs redirection, or simply has a short attention span, when it’s actually an unconscious response by the child to their frustration and visual discomfort.

3. Makes silly mistakes. Children with BVD come to know that they have a limited amount of time to complete their work before their visual symptoms return. As a result, they often rush through their assignments in an effort to complete them before the strain on their eyes brings about the usual headaches, blurry vision and double vision. This often leads them to make careless mistakes or miss important details.

Hence, a perfectly intelligent, hard-working student can appear to the teacher to be lazy and careless.